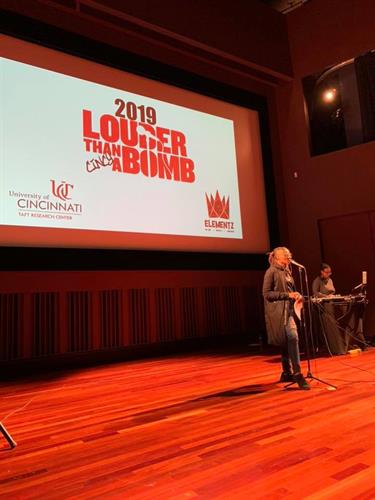 The winners from the Louder Than A Bomb Semifinals in March will have a final face off! Performing original pieces from the students themselves and being scored on their delivery, expression and more. Come show your support for these emerging poets and cheer for your favorites! Winners are awarded a cash prize!

About: The northernmost southern city, the southernmost northern city; the Queen city of the west, gateway to the north - - Cincinnati is a city with many identities. And poverty, gentrification, racism, violence, and pain. Our city seems like it is in constant pain. But we are hopeful. It is the youth of our city that carry our hopes of a better a future. Louder Than A Bomb gives voice to that youth. If you have a story and we want you to tell it. Join us for Louder Than A Bomb-Cincinnati, and be a part of the largest youth poetry slam contest in the world. Spoken Word, Lyrical History, Poetry, Hip Hop - find your voice with Louder Than A Bomb. Training starts now. The only thing you have to lose is yourself.